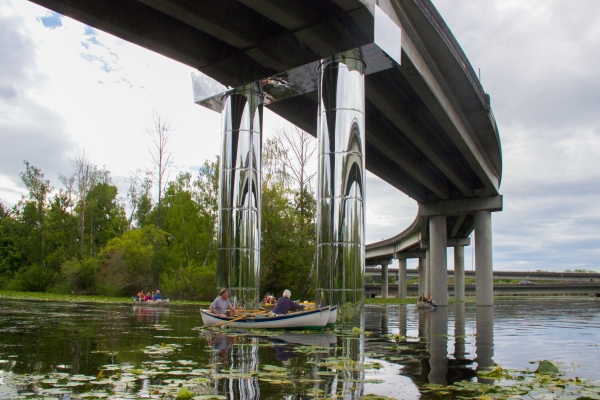 Seattle, WA – A hidden cove wedged between a highway and a former landfill in Seattle’s Montlake neighborhood is home to a new site-specific art installation called the Gate to Nowhere. The work celebrates the “ramps to nowhere” left abandoned after voters turned against the long-planned R.H. Thomson Expressway in 1972. The art installation is on display through this summer, the last before the ramps are fenced off and demolished starting later this year.

The Gate to Nowhere is by Re-Collective, a group of architects, artists and designers interested in the tenuous existence of soon-to-be-demolished structures. The installation wraps a single support pier — two concrete columns and a beam — in mirrored acrylic. The effect renders the pier in reflections of water, sky, lily pads and light.

“Our intention was to turn the idea of ‘natural beauty’ inside out,” said Re-Collective’s Caroline Davis. “This is truly a man-made landscape; from the freeway politics that built the original highway to the grass-roots citizen campaign that stopped the R.H. Thomson and allowed nature and people to reclaim it.” Re-Collective’s work simply puts all this on display.

In the absence of its intended purpose, the ramps have long been colonized by counterculture: graffiti artists, partiers, campers, off-leash dog walkers, nude sunbathers, bird watchers, kayakers and cruisers. Team member Greg Lewis said, “These kinds of unintended urban spaces are few and far between in our highly regulated city. It is truly a unique and democratic space.” Lewis’ “Boxed Up” project last year helped turn a vacant building on Capitol Hill into a temporary art gallery.

Though planning for the Gate to Nowhere began a year ago, both the project and Re-Collective team have their origins during the 2008 graduate program of Architecture at the University of Washington. The group’s first building-scale art installation was led by Abby (Martin) Inpanbutr and involved wrapping the UW Nuclear Reactor (More Hall Annex) in red balloons. The building was later added to the National Register of Historic Places. Similarly, the Gate to Nowhere project builds upon team member Rainer Metzger’s research on the landscape and infrastructure of Union Bay.

“The Gate gives physical form to the idea of ‘nowhere,’” said Metzger. “It adds a different perspective from which to see the site.”

Re-Collective suggests visiting the Gate to Nowhere by canoe or kayak. Rentals are available at the University of Washington Waterfront Activities Center, a 10-minute paddle away.